To his dear friend Atticus, Cicero reveals himself as to no other of his correspondents except perhaps his brother. In Cicero's Letters to Atticus we get an intimate look at his motivations and convictions and his reactions to what is happening in Rome. These letters also provide a vivid picture of a momentous period in Roman history, years marked by the rise of Julius Caesar and the downfall of the Republic.

When the correspondence begins in November 68 BCE, the 38-year-old Cicero is a notable figure in Rome: a brilliant lawyer and orator, he has achieved primacy at the Roman bar and a political career that would culminate in the Consulship in 63. Over the next twenty-four years—until November 44, a year before he was put to death by the forces of Octavian and Mark Antony—Cicero wrote frequently to his friend and confidant, sharing news and views and discussing affairs of business and state. It is to this corpus of over 400 letters that we owe most of our information about Cicero's literary activity. Here too is a revealing picture of the staunch republican's changing attitude toward Caesar. And taken as a whole the letters provide a first-hand account of social and political life in Rome. 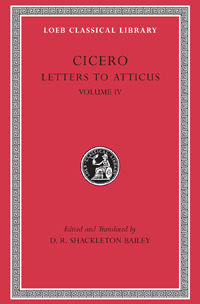