Aelian (Claudius Aelianus), a Roman born ca. AD 170 at Praeneste, was a pupil of the rhetorician Pausanias of Caesarea, and taught and practised rhetoric. Expert in Attic Greek, he became a serious scholar and studied history under the patronage of the Roman empress Julia Domna. He apparently spent all his life in Italy where he died after AD 230. 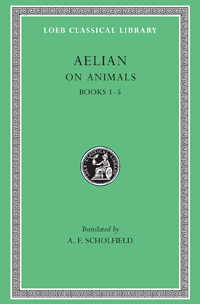