Plutarch, Moralia, Volume XIV: That Epicurus Actually Makes a Pleasant Life Impossible. Reply to Colotes in Defence of the Other Philosophers. Is "Live Unknown" a Wise Precept? On Music

The Loeb Classical Library edition of the Moralia is in fifteen volumes, volume XIII having two parts. Volume XVI is a comprehensive Index. 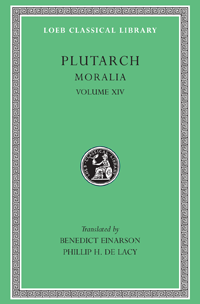