In this volume are three works concerning the campaigns engaged in by the great Roman statesman Julius Caesar (100–44 BCE), but not written by him. The Alexandrian War, which deals with troubles elsewhere also, may have been written by Aulus Hirtius (ca. 90–43 BC, friend and military subordinate of Caesar), who is generally regarded as the author of the last book of Caesar's Gallic War. The African War and The Spanish War are detailed accounts clearly by officers who had shared in the campaigns. All three works are important sources of our knowledge of Caesar's career.

The Loeb Classical Library edition of Caesar is in three volumes. 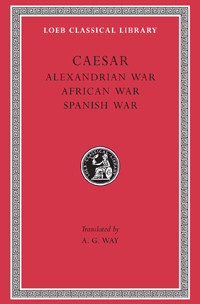