Dio Cocceianus Chrysostomus, ca. 40–ca. 120 CE, of Prusa in Bithynia, Asia Minor, inherited with his brothers large properties and debts from his generous father Pasicrates. He became a skilled rhetorician hostile to philosophers. But in the course of his travels he went to Rome in Vespasian's reign (69–79) and was converted to Stoicism. Strongly critical of the emperor Domitian (81–96) he was about 82 banned by him from Italy and Bithynia and wandered in poverty, especially in lands north of the Aegean, as far as the Danube and the primitive Getae. In 97 he spoke publicly to Greeks assembled at Olympia, was welcomed at Rome by emperor Nerva (96–98), and returned to Prusa. Arriving again at Rome on an embassy of thanks about 98–99 he became a firm friend of emperor Trajan. In 102 he travelled to Alexandria and elsewhere. Involved in a lawsuit about plans to beautify Prusa at his own expense, he stated his case before the governor of Bithynia, Pliny the Younger, 111–112. The rest of his life is unknown.

Nearly all of Dio's extant Discourses (or Orations) reflect political concerns (the most important of them dealing with affairs in Bithynia and affording valuable details about conditions in Asia Minor) or moral questions (mostly written in later life; they contain much of his best writing). Some philosophical and historical works, including one on the Getae, are lost. What survives of his achievement as a whole makes him prominent in the revival of Greek literature in the last part of the first century and the first part of the second.

The Loeb Classical Library edition of Dio Chrysostom is in five volumes. 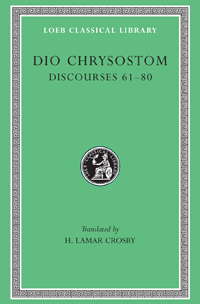