Philo, Every Good Man is Free. On the Contemplative Life. On the Eternity of the World. Against Flaccus. Apology for the Jews. On Providence

Philo. Every Good Man is Free. On the Contemplative Life. On the Eternity of the World. Against Flaccus. Apology for the Jews. On Providence. Translated by F. H. Colson. Loeb Classical Library 363. Cambridge, MA: Harvard University Press, 1941. 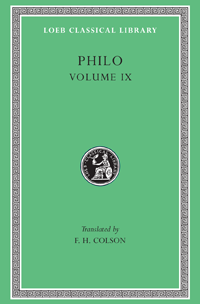