Philo, On the Special Laws, Book 4. On the Virtues. On Rewards and Punishments 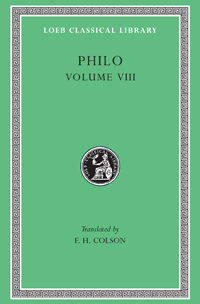