Plautus (Titus Maccius), born about 254 BCE at Sarsina in Umbria, went to Rome, engaged in work connected with the stage, lost his money in commerce, then turned to writing comedies.

Twenty-one plays by Plautus have survived (one is incomplete). The basis of all is a free translation from comedies by such writers as Menander, Diphilus, and Philemon. So we have Greek manners of Athens about 300–250 BCE transferred to the Roman stage of about 225–185, with Greek places, people, and customs, for popular amusement in a Latin city whose own culture was not yet developed and whose manners were more severe. To make his plays live for his audience, Plautus included many Roman details, especially concerning slavery, military affairs, and law, with some invention of his own, notably in management of metres. The resulting mixture is lively, genial and humorous, with good dialogue and vivid style. There are plays of intrigue (Two Bacchises, The Haunted House, Pseudolus); of intrigue with a recognition theme (The Captives, The Carthaginian, Curculio); plays which develop character (The Pot of Gold, Miles Gloriosus); others which turn on mistaken identity (accidental as in the Menaechmi; caused on purpose as in Amphitryon); plays of domestic life (The Merchant, Casina, both unpleasant; Trinummus, Stichus, both pleasant).

The Loeb Classical Library edition of Plautus is in five volumes. 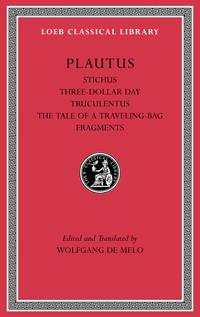