Aristotle, Categories. On Interpretation. Prior Analytics 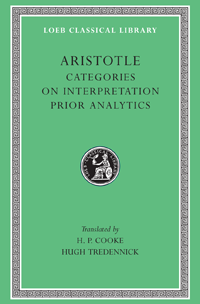