Philo, On the Decalogue. On the Special Laws, Books 1-3 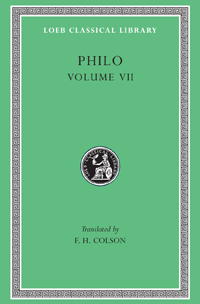