Aristotle, Minor Works: On Colours. On Things Heard. Physiognomics. On Plants. On Marvellous Things Heard. Mechanical Problems. On Indivisible Lines. The Situations and Names of Winds. On Melissus, Xenophanes, Gorgias 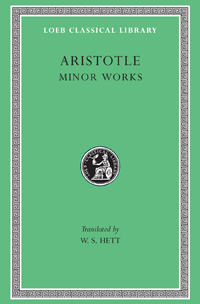