Lucian, The Passing of Peregrinus. The Runaways. Toxaris or Friendship. The Dance. Lexiphanes. The Eunuch. Astrology. The Mistaken Critic. The Parliament of the Gods. The Tyrannicide. Disowned

Lucian. The Passing of Peregrinus. The Runaways. Toxaris or Friendship. The Dance. Lexiphanes. The Eunuch. Astrology. The Mistaken Critic. The Parliament of the Gods. The Tyrannicide. Disowned. Translated by A. M. Harmon. Loeb Classical Library 302. Cambridge, MA: Harvard University Press, 1936. 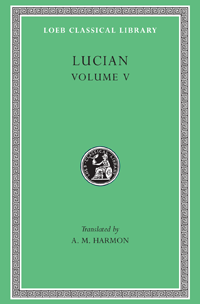