Philo, On the Creation. Allegorical Interpretation of Genesis 2 and 3 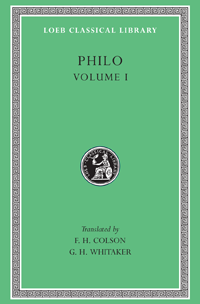