Lucian. Anacharsis or Athletics. Menippus or The Descent into Hades. On Funerals. A Professor of Public Speaking. Alexander the False Prophet. Essays in Portraiture. Essays in Portraiture Defended. The Goddesse of Surrye. Translated by A. M. Harmon. Loeb Classical Library 162. Cambridge, MA: Harvard University Press, 1925. 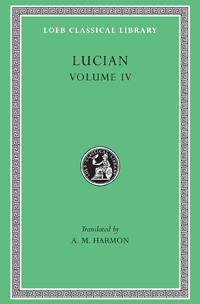