Lucian, The Downward Journey or The Tyrant. Zeus Catechized. Zeus Rants. The Dream or The Cock. Prometheus. Icaromenippus or The Sky-man. Timon or The Misanthrope. Charon or The Inspectors. Philosophies for Sale

Lucian. The Downward Journey or The Tyrant. Zeus Catechized. Zeus Rants. The Dream or The Cock. Prometheus. Icaromenippus or The Sky-man. Timon or The Misanthrope. Charon or The Inspectors. Philosophies for Sale. Translated by A. M. Harmon. Loeb Classical Library 54. Cambridge, MA: Harvard University Press, 1915. 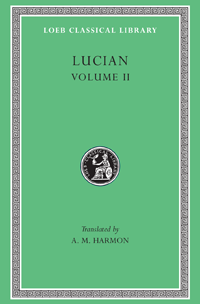