Procopius, History of the Wars, Volume I: Books 1-2. (Persian War) 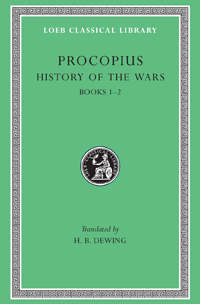