Jump to Content Jump to Main Navigation
A newer edition of this volume is available: 2015

Theocritus of the third century BCE, born at Syracuse, travelled widely in the Greek world. Having studied poetry at Cos with poet and critic Philitas, he composed poetry under patronage, chiefly perhaps at Syracuse and Cos; and then went to Alexandria in Egypt, whose King Ptolemy II (died 246 BCE), pupil of Philitas, befriended him. Here (and at Cos?) he spent the rest of his life. Most lovable of Greek versemakers, Theocritus was the founder of bucolic or pastoral poetry. Of his so-called Idylls, 'Little forms' or pieces (not all are genuine), ten are about pastoral life real or idealised; several are small epics (three are hymns); two are beautiful 'occasional' poems (one about a country walk, one to accompany a gift of a distaff for the wife of his friend Nicias); six are love-poems; several are mimes, striking pictures of common life; and three are specially expressive of his own feelings. The 24 'Epigrams' were apparently inscribed on works of art.

Moschus of Syracuse, 2nd century BCE, came next. As a grammarian he wrote a (lost) work on Rhodian dialect. Though he was classed as bucolic, his extant poetry (mainly 'Runaway Love' and the story of 'Europa') is not really pastoral, the 'Lament for Bion' not being Moschus's work.

'Megara' may be by Theocritus; but 'The Dead Adonis' is much later.

Bion of Phlossa near Smyrna lived in Sicily, probably late 2nd and early 1st century BCE. Most of the extant poems are not really bucolic, but 'Lament for Adonis' is floridly brilliant.

The so-called Pattern-Poems, included in the bucolic tradition, are found also in the Greek Anthology. 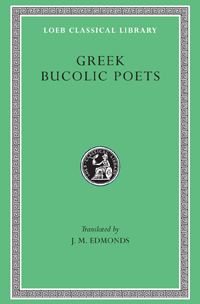