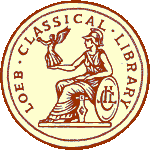 The logo of the Loeb Classical Library®, featuring Athena, goddess of wisdom, and Nike, goddess of victory.

The current Loeb Classical Library rejuvenation program involves not only more new and revised print volumes but also improved production. Dissatisfaction with the Greek font we had been using—particularly with the shape of some letters and inconsistent letter spacing—led us to commission a new Greek typeface designed specifically for our needs, which we have named ZephGreek and ZephText, in honor of Zeph Stewart (1921–2007), the longtime Trustee of the Loeb Classical Library.

Alex Kaczun, type designer and founder of Type Innovations, Long Island, NY, was commissioned in 1994 to design the new Greek typeface and fonts, which were based on and modeled after ‘Porson’ Greek, exclusively for Harvard University Press. Kevin Krugh of Technologies ’N Typography later made adjustments to kerning and breath marks, and converted these fonts to Unicode specifications. In addition, for a crisper type image we are now making our printing plates directly from electronic files (instead of photographically). These improved technologies are evident in print Loeb volumes published since 1995, and throughout the digital Library.

In 2016, publication of Early Greek Philosophy (LCL 524–532) prompted us to expand our font set still further to include Syriac, Arabic, Hebrew, and Armenian scripts. The Syriac font Estrangelo Edessa appears courtesy of George Kiraz and Beth Mardutho: The Syriac Institute, © 2002. All Rights Reserved.