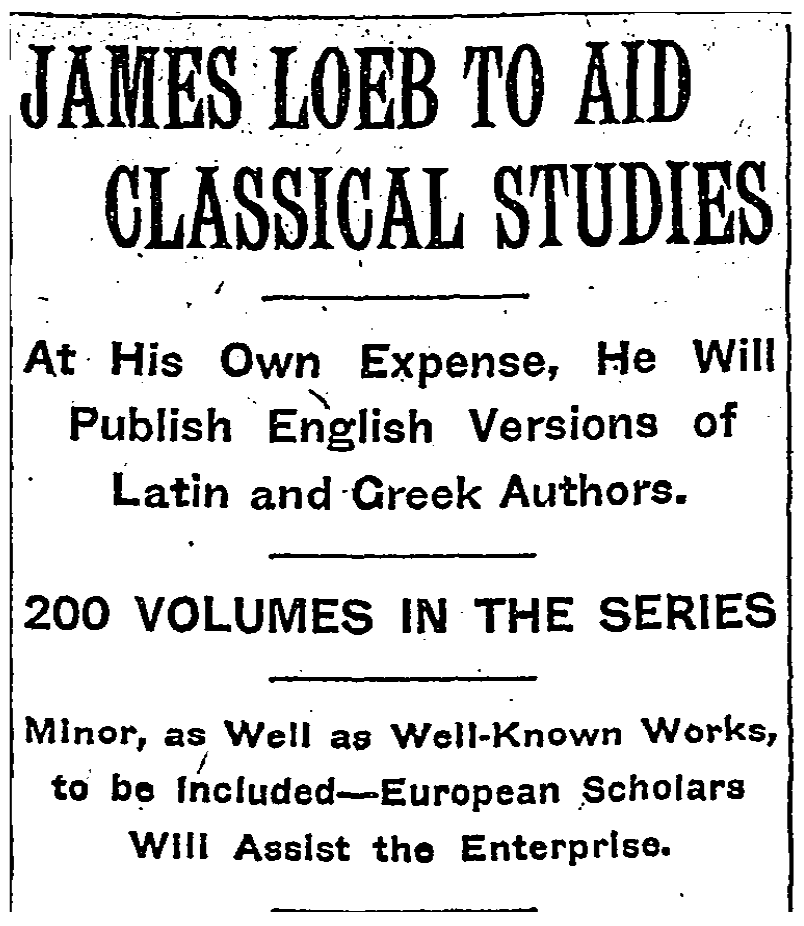 Reproduced by permission
of The New York Times

Now over a century old, the Loeb Classical Library is a venerable institution. But the series was a revolution when it was founded. Virginia Woolf was among those who first recognized and cheered that revolution:

“The Loeb Library, with its Greek or Latin on one side of the page and its English on the other, came as a gift of freedom… The existence of the amateur was recognised by the publication of this Library, and to a great extent made respectable… The difficulty of Greek is not sufficiently dwelt upon, chiefly perhaps because the sirens who lure us to these perilous waters are generally scholars [who] have forgotten…what those difficulties are. But for the ordinary amateur they are very real and very great; and we shall do well to recognise the fact and to make up our minds that we shall never be independent of our Loeb.”

James Loeb founded the Loeb Classical Library in 1911 with two goals in mind: First, to make the work of classical authors accessible to as many readers as possible—regardless of their knowledge of Greek or Latin—so they could profit from the wisdom of the ancients that had enriched his life so much; secondly, to offer the best of Anglo-American classical scholarship. He conceived of the Library and approached several publishers, looking for a partner, but initially had difficulty finding one. When he first offered the idea to George Macmillan, Macmillan responded: “I have conferred with my partners…and I am sorry to say that we cannot form a favourable opinion of it from any point of view.”

William Heinemann fortunately recognized the prestige that such an endeavor would bring to his new company and quickly agreed to coordinate the publishing arrangements. James Loeb provided the financial backing, keeping in touch from Switzerland, and Loeb and Heinemann, with an editorial board of three outstanding classicists, T. E. Page, W. H. D. Rouse, and Edward Capps, and an advisory board of ten eminent classicists from Great Britain, the United States, France, and Germany, set out to publish all that was important in ancient Greek and Latin literature with facing-page translations in English in “handy books of a size that would fit in a gentleman’s pocket.” The first twenty volumes were published in 1912.

These first volumes included “A Word About Its Purpose and Its Scope” written by James Loeb to explain the mission of the Loeb Classical Library:

“To make the beauty and learning, the philosophy and wit of the great writers of ancient Greece and Rome once more accessible by means of translations that are in themselves real pieces of literature, a thing to be read for the pure joy of it, and not dull transcripts of ideas that suggest in every line the existence of a finer original form from which the average reader is shut out, and to place side by side with these translations the best critical texts of the original works, is the task I have set myself.”

Loeb’s vision of the Loeb Classical Library as a collection of the best of Anglo-American scholarship was realized in two ways. First, the original three editors were a distinguished trio from both sides of the Atlantic: T. E. Page, W. H. D. Rouse, and Edward Capps. Secondly, the books were manufactured in London and published simultaneously in America (first by Macmillan, which had changed its mind, and later by G. P. Putnam).

The Loeb Classical Library had been publishing books for only two years when World War I broke out. During the four years of war, between 1914 and 1918, a steady stream of fifty-four new volumes was published, including works by Virgil, Ovid, Marcus Aurelius, and Galen.

Harvard University could have appointed any publishing house to oversee this successful series, but it chose Harvard University Press. The Press then contracted with Heinemann for the same manufacturing and distributing services used before, but instead of G. P. Putnam, Harvard University Press became the American distributor, maintaining control of fiscal matters and leaving editorial matters under the supervision of the trustees of the Loeb Classical Library Foundation. This arrangement lasted for 56 years until Heinemann withdrew from the arrangement in 1989.

In 1939 World War II broke out in Europe. Although the ambitious Loeb Classical Library publishing schedule continued, the war hindered efforts to import books from England, making new editions difficult to obtain in America. While thirty-eight new volumes were published from 1939 to 1945, they were not always available in the United States, particularly as the war dragged on. Only ten of these thirty-eight new volumes were published in the last three years of the war, an average of about three a year (considerably fewer than the approximately ten per year average in the early and mid-1930s). In 1944 there were no new volumes added to the Loeb Classical Library, making it the first year without a new edition since the Library’s founding.

The war also had a direct impact on Loeb Classical Library stock. In the late spring of 1940, approximately 200,000 volumes sat in the London warehouse of J. Burn & Company. Until this time, shipments to the United States had been made in small batches of several thousand at a time, but as prospects for England looked increasingly grim, William Smith (then Business Manager at Harvard University Press) placed a substantial order of 122,675 volumes to be shipped to the United States. On the treacherous trip across the Atlantic, one ship with over 9,000 volumes on board was sunk by a German U-boat. The rest arrived safely, adding 113,032 volumes to Harvard University Press’s stock.

This Loeb Classical Library shipment arrived just in time. On July 10, 1940, the Germans began a protracted air attack on Britain and in the autumn of 1940, a bomb hit the J. Burn & Company warehouse, destroying nearly half the Loeb volumes housed there. In 1941 another German bomb hit the same spot, destroying the remaining volumes and leaving Heinemann’s stock nearly depleted. Meanwhile, in the United States, Harvard University Press continued to sell the volumes that William Smith had rescued and sales actually increased during the war. By the war’s end, however, Harvard had also run out of stock on 158 of the 369 volumes that had been published to date, with no way to reprint or restock from England.

The postwar years brought many changes in the Loeb Classical Library publishing program. While the series had averaged over ten new titles a year since 1912, output began to wane in the 1950s. W. H. D. Rouse retired in 1947, and L. A. Post (who had succeeded Edward Capps) retired in 1968, leaving E. H. Warmington as the sole editor, which inevitably slowed progress on the series. This same period brought changes to Heinemann. The publishing house had experienced financial difficulties and had been sold several times, while the Loeb Classical Library suffered from lagging sales and inadequate management.

In 1973 Brian Murphy, Operations Manager at Harvard University Press, ordered sweeping changes in the Loeb Classical Library’s operations and future commitments, restoring its prosperity once again. In December 1988, Heinemann—now owned by the Octopus Group—decided that it would concentrate solely on trade books. The Loeb Classical Library, it was decided, did not fit this new emphasis. By January 1, 1989, Heinemann had withdrawn from the operation, 300,000 volumes stored in England had been relocated, and both production and worldwide distribution had been assumed by Harvard University Press.

Once the initial transition was made, Harvard reassessed the Loeb Classical Library to decide what works should be added and revised. After seeking advice on priorities and potential translators from twenty-two classics scholars, a smaller committee of scholars was formed to create a renewal plan founded on the publication of four or five new volumes a year. This plan includes titles new to the Loeb Classical Library (such as Chariton), completely new editions and translations (such as Euripides), and thoroughly revised editions (such as Homer).

This ambitious program has remained unchanged in its essentials since 1989. As our understanding of texts and translation styles changes over time, and introductions and footnotes become outdated with the emergence of new scholarship, older editions are revised or replaced. New titles are added to the series, while existing titles are continually reprinted so that the complete Loeb Classical Library always remains in print.

Additionally, the seemingly harmless edict included in the early contracts to alter or omit licentious and obscene passages—anything that “might give offense”—is now considered to be shabby scholarship. The early edition of Catullus contains a sentence which had been translated: “’Tis you I fear, you and your passions, so fatal to the young, both good and bad alike.” The new translation, while accurate, also explains why it had originally been diluted: “’Tis you I fear, you and your penis, so ready to molest good boys and bad alike.” Other passages once considered inappropriate have been restored: “Libo’s soft and subtle farting” in Catullus. Offending passages were not always deleted or altered; sometimes they were simply translated into another language. Greek was usually translated into Latin on the facing-page English text, and in the first edition of Martial, the offensive Latin was translated into Italian. This—while not necessarily poor scholarship—makes it difficult for someone without knowledge of Latin (or Italian) to profit from the translation.

Another change reflected in new Loeb Classical Library editions is that the style of the English translations is changed to reflect today’s language preferences. While it was once considered suitable for Homer’s Odyssey to be translated into the English of the King James Bible, this resulted in passages like: “Odysseus, since thou hast come to my high-roofed house with floor of brass, thou shalt not, methinks, be driven back.” This is not prose that one would want to read for 500 pages and, for today’s readers at least, it’s also not in keeping with James Loeb’s original vision of making the Loeb Classical Library as accessible as possible. Another example is in LCL 225, where the Mimes of Herodas—in an attempt to suggest the Greek dialect in the original—were translated not into English, but into Scottish dialect. Most readers today would not only fail to grasp the subtlety of this suggestion, but would also struggle with the Scottish dialect.

Although Harvard now has sole responsibility for the Loeb Classical Library, it continues, as James Loeb wished, to be a joint Anglo–American enterprise. Editors and translators are drawn from both sides of the Atlantic. European sales and distribution are managed by Harvard University Press’s London office, and sales and distribution for the rest of the world is managed from Cambridge, Massachusetts. Typesetting, printing, and binding are now done in the United States.

The authors in the Loeb Classical Library span fourteen centuries and every genre. Their continued popularity into the twenty–first century marks the fact that more people are reading the classics in translation than ever before. The digital Loeb Classical Library continues the historic mission of making all that is important in Greek and Latin literature available to readers anywhere in the world—with accurate, literate, English translations.