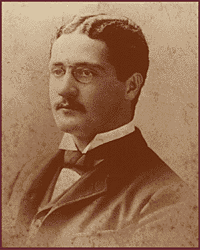 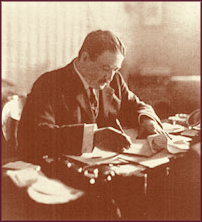 James Loeb was born August 6, 1867, in New York City, the son of Solomon and Betty (Gallenberg) Loeb. Solomon was a partner and founder of the banking firm of Kuhn Loeb & Company. Betty, the daughter of a professional musician, loved music and learning and instilled these interests in her children through diverse lessons and family musical events like evening chamber music concerts at home.

Entering Harvard College in 1884, James Loeb concentrated in Greek and Latin. He was also involved in music at Harvard as vice president of the Pierian Sodality, Harvard’s music club and orchestra. His fellow students remembered his musical gifts: “How well some of us remember afternoons in his room when he entertained us with his cello, played with a sympathy and skill rarely attained by an amateur,” wrote one. On graduation, he received an offer through his teacher and friend Charles Eliot Norton to study Egyptology in Paris and London.

Instead, he acceded to his father’s wish, entering Kuhn Loeb & Company in 1888 and becoming a partner in January 1894. The years in New York City were full of heavy business obligations and civic involvement. In the winter of 1891 a severe illness (possibly depression) obliged him to give up business and he spent the summer traveling in Scandinavia, returning to banking again only until January 1, 1902, when he retired because of renewed health problems. This latest breakdown in his health he attributed to overwork in the banking business, amateur politics, and music. He retired to a quieter place, his farm at Shrewsbury, New Jersey, moving to Germany in 1905, where he stayed (except for a period during World War I) until his death in 1933.

His philanthropy in the classics and the arts began before this retirement and continued throughout his lifetime. His efforts to make classical knowledge more accessible are best illustrated in the Loeb Classical Library, which made classical writers available in a format that anyone can enjoy. On March 13, 1925, he received an honorary degree of Doctor of Laws from Cambridge. The Public Orator praised his work: “Our guest has given Paradise back to us all by furnishing, both for the learned and the unlearned, Greek and Latin literature, well edited, beautifully translated, and distinguished by all that the best skill and printing and typography can accomplish.” He also left a large endowment to Harvard for the Classics Department, became a trustee of the American School of Classical Studies at Athens, took great interest in the excavations undertaken by the Boston Museum of Fine Arts and the Archaeological Institute of America, and donated to the Staatliche Antikensammlungen in Munich his collection of bronzes and vases of the classical period.

His support of the arts moved in several directions. His own interest in music led him to contribute a large sum to found in New York the American Institute of Musical Art (later The Juilliard School), making it the first endowed music school in the country and allowing it to offer music instruction at a nominal fee. He also helped bail out the Philharmonic Society of New York in the early 1900s and donated money for the Harvard Music Department’s building and concert hall, Paine Hall.

In a preface included in early editions of the Loeb Classical Library, James Loeb explains why he felt it was important to focus so much of his philanthropy in art, music, and classical knowledge:

“In an age when the Humanities are being neglected more perhaps than at any time since the Middle Ages, and when men’s minds are turning more than ever before to the practical and the material, it does not suffice to make pleas, however eloquent and convincing, for the safeguarding and further enjoyment of our greatest heritage from the past. Means must be found to place these treasures within the reach of all who care for the finer things of life.”

By 1905 Loeb had moved to Munich, living quietly and studying. In alumni notes he refers to himself as “an idler who keeps busy, spending time with the interests which are dearest to me: Art, Literature and Music.” His closer study of classical archaeology and literature during this time led him to publish several things, including a translation into English of Couat’s Alexandrian Poetry under the First Three Ptolemies; Decharme’s Euripides and the Spirit of His Dramas; and catalogs of his collection of ancient bronzes and pottery.

It was during this time in Munich that Loeb’s enormous interest in and support of medical and psychiatric institutions became evident. In the early 1900s he stayed for some time with Sigmund Freud in Vienna, who recommended him to Emil Kraepelin in Munich. His association with Kraepelin led to the founding of the Deutsche Forschungsanstalt für Psychiatrie in Munich. This German Research Institute for Psychiatry received the largest combined benefaction from Loeb: one million marks to establish it, further gifts until his death, and one million dollars at his death. Loeb also supported other medical institutions, including the gift of a 60-bed hospital in Murnau and the establishment of the Solomon and Betty Loeb Home for Convalescents in White Plains, New York.

James Loeb suffered another severe breakdown in 1917, recovering in 1921. The year of his recovery, he married Marie Antonie Hambueschen—a widow with two sons and the faithful nurse who had cared for him for so long. In the same year, he moved permanently to his country estate, Hochried, at Murnau near Oberammergau, and died there on May 27, 1933, just four months after the death of his wife. An editorial in the New York Times read: “It seems not too much to say that James Loeb was a restorer of the humanities, a reviver of learning, a continuer in his way of the tradition of the Renaissance.” A niece remembered him as “the most vivid, brilliant personality. As handsome as a Greek god, he charmed everyone, was an excellent scholar, a fine musician and an esthete in the best sense of the word.”